Politically incorrect Nancy Pelosi shooting targets in two sizes. Use them with your favorite firearms to practice and increase your marksmanship with either the small (8 1/2″ x 11″), or large (12″ x 18″) targets. A great way to perfect your shooting skills on the range while simultaneously protesting and poking fun at the phony, arrogant, and pretentious politicians, celebrities, and public figures who like to lecture us common folk and project their moral superiority. These are 100% American Made gun targets.

It’s been said that the modern Democratic party is no longer the party of workers, but rather, it is the party of the wealthy coastal elites. You know what I’m talking about: wealthy tech CEOs and their leftist tech workers, upper middle class California suburbanites, New York media moguls and their college educated “reporters”, etc.

No politician in Washington is a better representation of these woketards than Nancy Pelosi, the queen of the coastal elites, the lady who showed off her $24,000 commercial grade refrigerators during the early days of the pandemic from the safety and security of her expensive California home.

I’m from California, and make no mistake, these people have nothing but contempt for the average American worker they can’t control. Notice the emphasis there. They love working class people who will do what they say and vote for them at the same time. These are the downtrodden individuals who unfortunately believe that their lives will be better off with the Democrats’ help. They accept the woke lectures in exchange for the government handouts, but the American workers they can’t control, they despise. These are the individuals who gladly work honest, blue collar type jobs to support their families; the individuals who don’t want anyone’s help because they know it’s a trade off for their freedom; the individuals who don’t live in million dollar California homes, with Subzero refrigerators and shelves of gourmet ice cream. These individuals are the true patriots, who love America despite her flaws, and are unwilling to change their ways to please the language police on the left.

If you’re one of these patriots, and you’re sick of Pelosi and her minions trying to tell you what to do, what to say, and how to say it, then take out your frustration and stress on this non-woke, politically incorrect Nancy Pelosi shooting target! Show the world what you think of Pelosi’s actions in Washington! 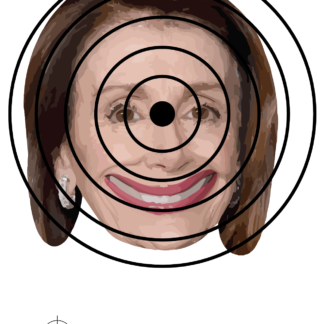