Politically incorrect Michael Moore gun shooting targets in two sizes. Use them with your favorite firearms to practice and increase your marksmanship with either the small (8 1/2″ x 11″), or large (12″ x 18″) targets. A great way to perfect your shooting skills on the range while simultaneously protesting and poking fun at the phony, arrogant, and pretentious politicians, celebrities, and public figures who like to lecture us common folk and project their moral superiority. These are 100% American Made gun targets.

If any one person should convince you that the Democrats’ ultimate goal is to take all of your guns, it would be the leftist filmmaker Michael Moore. After all, he says the quiet parts out loud, and although he appears to spend most of his time these days feeding his face instead of making films, he still manages to find time to advocate for gun confiscation and gun control. Typical of leftist Hollywood elites, not only does he have total trust in the government, but he also feels the need to constantly lecture us about how to live life, and what we do, and do not, need in our lives (Hint: he doesn’t believe we need guns).

If you haven’t read our Who Are We? section, then you may be unaware of the fact that we occasionally get hate mail from actual gun enthusiasts who chide us for “giving responsible gun owners a bad name”. As Moore aptly demonstrates, the nut jobs on the left don’t care about responsible gun ownership, however you may define it. They simply want to confiscate all guns and repeal the 2nd amendment. And why does Moore specifically want to repeal it? Because he understands the history of this country (LOL!) and is certain that the founders only meant for the 2nd amendment to apply to the British during the Revolutionary War. Yeah Michael Moore, I’m sure the founding fathers never envisioned another possible tyranny other than the British Empire. I’m sure they were ready to throw away their guns once they won the war! If you’re sick and tired of Moore’s nonsense, then take out your frustration on a few of these targets. Protest Moore’s UnAmerican gun control rants on the range by practicing how you’ll give up your guns: you’ll give them the bullets first. 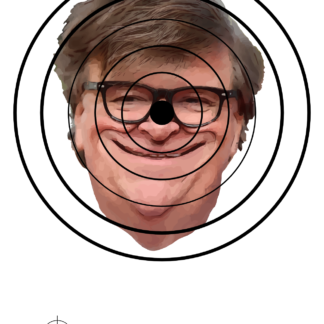