Politically incorrect Kamala Harris shooting targets in two sizes. Use them with your favorite firearms to practice and increase your marksmanship with either the small (8 1/2″ x 11″), or large (12″ x 18″) targets. A great way to perfect your shooting skills on the range while simultaneously protesting and poking fun at the phony, arrogant, and pretentious politicians, celebrities, and public figures who like to lecture us common folk and project their moral superiority. These are 100% American Made gun targets.

She sees racism everywhere … except when she looks at Joe Biden-after he chose her as a running mate of course! When she was competing with Joe Biden for the socialist Democrat presidential ticket, she thought he was a racist scumbag. Now that he chose her for vice president, she thinks he’s amazing. Funny how those things work themselves out isn’t it? At the end of the day though, it doesn’t really matter, because her ratings are plummeting as quickly as Biden’s. She’s probably the phoniest politician out there-and that’s saying a lot. If you’re sick of listening to her cackling laughter every time she’s in an uncomfortable situation, then take out your anger and frustration on one of these Creepin’ Kamala shooting targets! It won’t end the cackling, but perhaps it will end your stress! 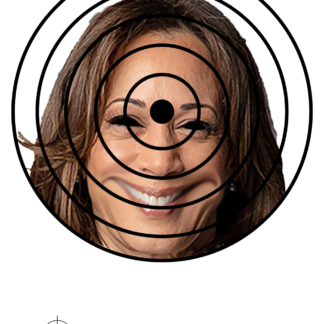