Politically incorrect Chuck Schumer gun shooting targets in two sizes. Use them with your favorite firearms to practice and increase your marksmanship with either the small (8 1/2″ x 11″), or large (12″ x 18″) targets. A great way to perfect your shooting skills on the range while simultaneously protesting and poking fun at the phony, arrogant, and pretentious politicians, celebrities, and public figures who like to lecture us common folk and project their moral superiority. These are 100% American Made gun targets.

Poor, teary eyed Chuck Schumer. The guy just can’t catch a break. He finally obtained his coveted, ego boosting job as the Senate majority leader, only to find that he’s unable to get much of anything done due to the centrists (i.e. reasonable people) within his own party. I guess old Cryin’ Chuck won’t go down as one of the better majority leaders because he can’t stop licking the boots of the progressives (i.e. unreasonable people, crazy people) who seem to run the Democratic party these days. Maybe if he stops brown nosing leftists and threatening Supreme Court justices, even for a few moments, he could actually accomplish something on our wide open southern border, if he can handle it emotionally that is … Trump’s immigration crackdowns did have a tendency to send Chuck into various crying fits. 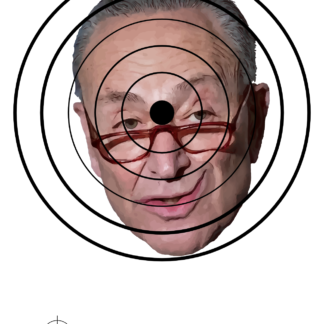