Politically incorrect Elizabeth Warren shooting targets in two sizes. Use them with your favorite firearms to practice and increase your marksmanship with either the small (8 1/2″ x 11″), or large (12″ x 18″) targets.

She’s the epitome of white guilt. You know what I’m talking about. That middle class neighborhood white girl you knew growing up, who went off to college to be “educated”, and then ended up as a staunch and unapologetic leftist? Well, creepy Liz Warren is the Washington representation of that individual. It’s been said that she once claimed her early family life teetered “on the ragged edge of the middle class”, and yet somehow, paradoxically, she seems to support the standard Democrat talking point-and lie-that the American system is somehow setup to reward only white people. I guess “the system” must have rightfully recognized creepy Pocahontas’ Indian-er Native American-I mean Indigenous Person’s-heritage (LOL!). 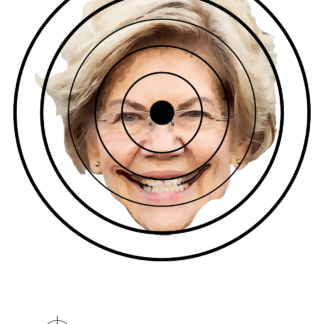