Politically incorrect Barack Obama shooting targets in two sizes. Use them with your favorite firearms to practice and increase your marksmanship with either the small (8 1/2″ x 11″), or large (12″ x 18″) targets. A great way to perfect your shooting skills on the range while simultaneously protesting and poking fun at the phony, arrogant, and pretentious politicians, celebrities, and public figures who like to lecture us common folk and project their moral superiority. These are 100% American Made gun targets.

Lies, lies, and damn lies … it’s funny how you always hear the fake news media associating lying with Trump and his presidency. They seem to conveniently forget the mountain of lies told by Obama throughout the campaign trail and his presidency: he would close Guantanamo, make government more open (LOL!), not go after guns, etc. It seems like every other word that came out of his mouth was a lie, and that doesn’t even take into consideration the tower of lies told while Obamacare was moving its way through Congress, like the whopper of a falsehood that you’d be able to keep your own doctor. If leftists want to call Trump the Liar in Chief, then Obama is certainly Obama Bin Lyin, and now you can take out your frustrations with the former president by filling one of these politically incorrect Obama targets full of bullet holes. See if you can create a hole for every one of Obama’s lies! There won’t be anything left of the target when you’re done! 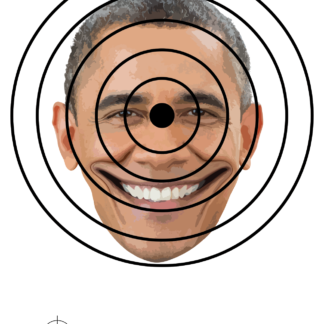