Politically incorrect Joe Biden/Kamala Harris 2020 shooting target 5 packs in two sizes. Use them with your favorite firearms to practice and increase your marksmanship with either the small (8 1/2″ x 11″), or large (12″ x 18″) targets.

Look, we all know that the 2020 election was a joke, even the socialist Democrats know it. Why else would they fight so hard to get Trump convicted of imaginary crimes? It was a joke, and we all know there were voting irregularities that can’t be easily explained or swept under the rug, but truthfully, who needs voting irregularities when you have the fake news media on your team. The greatest tragedy of 2020-and the biggest advantage for Biden/Harris-was the slanted media coverage from the “objective” news outlets that covered the election and the events that led up to it. They stayed quiet while Joe hid in his basement, and ran a cover up job when his son and corrupt business dealings were exposed. Tell the world what you think of that sham of an election by practicing your marksmanship on these Biden/Harris targets! Who knows, you just might hit a bullseye-or three! 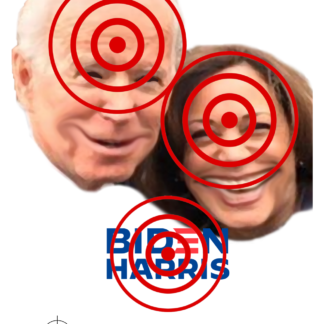