Politically incorrect Bernie Sanders gun shooting targets in two sizes. Use them with your favorite firearms to practice and increase your marksmanship with either the small (8 1/2″ x 11″), or large (12″ x 18″) targets. A great way to perfect your shooting skills on the range while simultaneously protesting and poking fun at the phony, arrogant, and pretentious politicians, celebrities, and public figures who like to lecture us common folk and project their moral superiority. These are 100% American Made gun targets.

If there’s a single politician who fully and unflinchingly represents the far left, it would have to be the socialist kingpin Bernie Sanders. His followers are the true believers of the new leftist religion, and if you stand in their way, they’ll hound you, destroy your business, destroy your reputation with illogical claims of racism (everything is racist remember!), and tear down every cherished historical figure, statue, or document that stands in their way and prevents them from achieving their “equitable”, utopian society.

You see, leftists like Sanders have done to racism the very same thing they did to God many years ago. Ask a God believing leftist or liberal what God is, and they’ll usually respond that God is everywhere and means everything. They’ll say that God is love; or God is nature; or God is the universe. From the leftist and liberal perspective, God can pretty much mean anything, and as a result, God ends up meaning nothing at all, nothing in particular. Likewise, racism now means everything. Offend someone? That’s racist! Ignore someone? That’s racist! Acknowledge someone the wrong way? That’s racist! So racism now spirals down the same rabbit hole that Bernie’s leftists created for God. Racism now means everything, and as a result, it means nothing at all, nothing in particular. It has lost its true meaning, because they have devalued the word by expanding its definition to encompass almost anything.

If you’re sick and tired of Bernie Sanders and other woke leftists constantly redefining common language and making every attempt to scrub our nation’s heroes from the history books, then take out your frustrations on this politically incorrect Bernie Sanders shooting target! Fill it full of bullet holes and tell the religious army of the woke what you think of their socialist dreams! 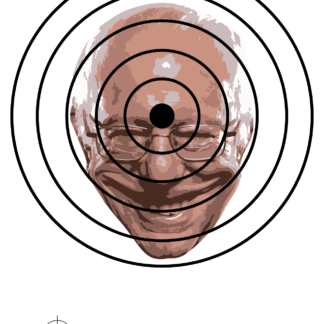