The Deadliest Virus Is The Media – Square Magnet – 2 Sizes – White

SKU: N/A Categories: All Politically Incorrect and Patriotic Products, Stickers and Magnets, The Deadliest Virus Is The Media

They turned their broadcasts, articles, and interviews into digital soapboxes. They conspicuously slanted all coverage in favor of the left, and they haven’t stopped since. Yes, the coronavirus may be with us forever, but the fact of the matter is that the media is the true virus. In fact, they are the deadliest virus in America. If you agree, then call them out with this high quality printed magnet. Maybe you’ll get people questioning their trust in the media. Maybe you’ll offend leftists! A two for one! 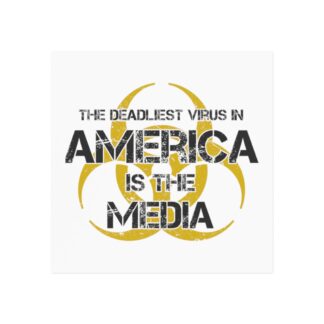