Guns only have two enemies: rust and liberals. This is the ONLY product that protects against both! If these are in stock, buy a couple of bottles when you can, because they get sold out often!

Guns only have two enemies: rust and liberals. Liberal Tears gun oil protects against both, and now that it’s bacon scented, it may just scare off your neighborhood leftists as well! They’re a bit further to the left than most liberals, so the smell of any dead animal alone will surely send them into a frantic tizzy. Before you know it, they’ll be off protesting for animal rights, rioting, and burning down buildings-but hey, at least they won’t be around to bother you. You’ll be able to clean your guns in peace and quiet, which is a good thing considering that Liberal Tears has an extremely advanced, proprietary blend, that will deliver unsurpassed performance in the harshest environments. Liberal Tears will give you guaranteed firearms protection, so buy some before we run out of stock again-which is often!

Watch the Video Where We Explain HOW Liberal Tears Gun Oil is Collected!

Do people actually use Liberal Tears Gun Oil on their firearms?

Of course we do.

There are a lot of folks that use Liberal Tears Gun Oil EXCLUSIVELY on their firearms. 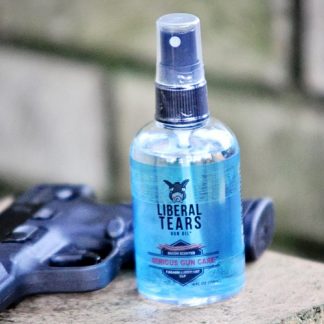